Steven T. Budaj, principal attorney in the firm of Steven T. Budaj, P.C., is an Attorney At Law licensed to practice law in the State of Michigan. Mr. Budaj has been practicing law since 1979 following his graduation from the Detroit College of Law.

Mr. Budaj has also received a Bachelor of Science Degree in Business Administration, from Wayne State University in 1975.

Steven T. Budaj has attained an AV preeminent rating from Martindale-Hubbell™.*
This is the highest rating an attorney can achieve in both Ethical Standards and Legal Ability.
* An AV® Rating signifies that the lawyer has reached the heights of professional excellence. He or she has usually practiced law for a number of years, and is recognized for the highest levels of skill and integrity.
For more information about Martindale-Hubbel ratings click here.
Click the image below for more information about this rating.

Mr. Budaj is a member of the following professional organizations:

Mr. Budaj is admitted to practice law in the following jurisdictions:

Mr. Budaj specializes in the following areas of law:

We are always available.
Click the email link above to send email
or call: 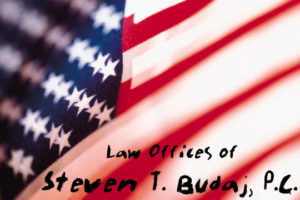